"In a class with other runaway debuts like Laura Hillenbrand's "Seabiscuit" and Katherine Boo's "Behind the Beautiful Forevers": These nonfiction narratives are more stirring and dramatic than most novels. And Ms. Macy writes so vigorously that she hooks you instantly. You won't be putting this book down."—Janet Maslin, New York Times

"In a world of blue-collar victims, where logging chains seal forever the doors of mills and factories from the Rust Belt to the Deep South, Beth Macy's award-winning look at one furniture maker's refusal to give in is a breath of hope-and a damn fine story to read. The book tracks John Bassett's fight to keep American jobs on this side of borders and oceans, and keeps one American town from becoming a place of empty storefronts and FOR SALE signs."—Rick Bragg, Pulitzer Prize-winner of The Most They Ever Had

"The author's brightly written, richly detailed narrative not only illuminates globalization and the issue of offshoring, but succeeds brilliantly in conveying the human costs borne by low-income people displaced from a way of life.... A masterly feat of reporting."—Kirkus (starred review) 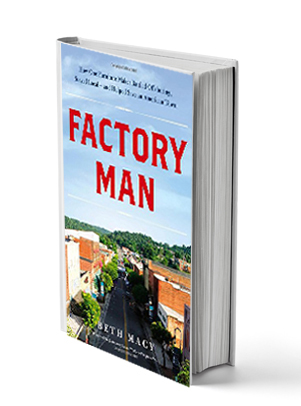